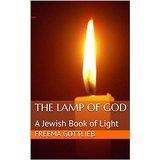 Access to newly available Kindle edition and other formats of Freema Gottlieb's The Lamp of God: A Jewish Book of Light
"At once poetic, profound, scholarly and inspirational, THE LAMP OF GOD has stunning insights on almost every page , while being a major work of Jewish spirituality in its own right. A rare, lovely and enchanting work, and one that will make you think and feel more deeply about Judaism, humanity and God." —(Rabbi Lord) Jonathan Sacks, Chief Rabbi emeritus UK)
The Jewish Week Fall arts and Jewish Book of light
"A much-admired book on contemporary spirituality, gathering more than 3,000 years of Jewish inspirational thought on the metaphor of light, THE LAMP OF GOD: A JEWISH BOOK OF LIGHT by Freema Gottlieb (Amazon) is newly available again, in a Kindle edition." (Sandee Brawarsly, book editor, The Jewish Week) 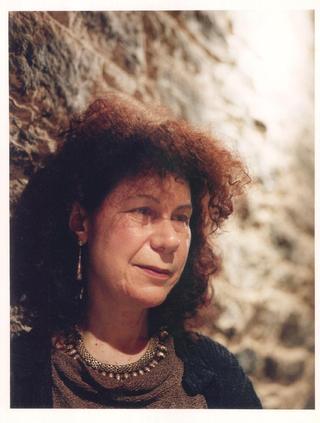 Born in London and raised in Glasgow, Freema Gottlieb was awarded the top scholarship to Girton College at Cambridge University, where she studied English literature, and received a BA and M.Phil. The first to have access to the Leonard Woolf papers, she received a PhD from University College, London, for her research on Leonard and Virginia Woolf.

After editing for the Soncino Press, reporting for the Jewish Chronicle, and working for BBC World News, she left the UK for New York, to teach literature and to do public relations and speechwriting for the American Jewish Joint Distribution Committee, an international relief organization.

In addition to contributing literary reviews for such periodicals as the Times Literary Supplement and the New York Times Book Review, Freema ghost-wrote Jewish Folk Art (Summit Books) for Joy Ungerleider-Mayerson, the former curator of the Jewish Museum in New York.

Through the Joint Distribution Committee, Freema volunteered for two years to teach midrash in the Near East Department of Charles University and at the Jan Hus Theological Seminary in Prague, where she collaborated with photographer Alois Haljan on Mystical Stonescapes of Prague Jewish Town and Village Graveyards.

An occasional contributor to the Jewish Week’s column on the weekly Sabbath Bible reading, she is the author of The Lamp of God:a Jewish Book of Light, a meditation on over 3,000 years of Jewish sources to which the light metaphor is key.

She is at work on a “midrashic” memoir in progress about the gut renovation of an old pre-1948 Jerusalem apartment and has recently been researching her father's role in saving the lives of many hundreds of Jewish youth through founding the Vienna Youth Aliyah School in the early days of the Anschluss.

YOM HASHOAH Scotland April 11, 2018. RABBI DR WOLF GOTTLIEB: UNSUNG HERO What Scots Head of Rabbinical Court and communal rabbi did as a young man in postAnchluss Vienna, a talk by his daughter Freema Gottlieb. Watch it here on YouTube.

London Jewish Chronicle article about how Rabbi Wolf Gottlieb, Freema's father helped save many young people by setting up a special Jewish "school of emigration" immediately after the Anschluss.

What Scots communal Rabbi Dr. Wolf Gottlieb managed to achieve by pioneering a "school for emigration" in post-Anschluss Vienna that helped save countless young lives. before he himself became a refugee and accepted the job of communal rabbi in Glasgow's Queen's Park Synagogue and Head of the Scots Rabbinical Court.

ARTICLES
“Why the Figure of Honi the Circle Drawer Resembles That of Moshe Our Teacher.” European Judaism 15, no. 1 (Summer 1981).

LETTERS TO THE EDITOR French antisemitism

LETTERS TO THE EDITOR FRENCH ANTISEMITISM

REVIEWS OF THE LAMP OF GOD.

REVIEWS OF THE LAMP GOD
“A masterful work, and so timely; there is a spiritual yearning in the country, which The Lamp of God will help to satisfy.”
—Bill Moyers, Public Affairs Television, Inc.

“Freema Gottlieb’s beautiful book The Lamp of God is written in black fire on white fire; it is the kind of book that had to be written, that comes from the deep sources of both the author and the Jewish tradition, and whose brilliance blazes off its rough edges.”
“Both a very conservative book, in love with roots, with nuances of orthodox tradition, immersed in sources, and an entirely radical, free-thinking one, that gives one a sense of understanding stories in the Bible, and mitzvoth, in a way that they have never been understood before.
—Francis Landy, professor of Religious Studies, University of Alberta, Midstream,.

“Of deep interest to all who want to know more about the extraordinary achievements of those who, through so many ages, have given their poetic and imaginative power to the enrichment of an ancient tradition. A dedicated performance and an admirable book.”
—Frank Kermode, Fellow of the British Academy, professor emeritus of English Literature at Cambridge, member of the working party on interpretation, Hebrew University, Jerusalem, coauthor The Literary Guide to the Bible, and author of The Oxford Anthology of English Literature and many other works


“Freema Gottlieb weighs into history, the history of our beginnings, like a true poet. Light in her hands is tangible; it can be felt, it can be held. Her art is truly transformational in the best sense: it treats its subject as though for the first time, and will certainly cause a stir.”
—James Ellison, former executive editor, Book-of-the-Month Club, and book editor of Psychology Today

“Freema Gottlieb is a truly talented storyteller gifted with a luminous and original imagination.”
—Judith Rossner, novelist, author August, Looking for Mr. Goodbar and other novels.

“The writing is not linear and expository, but associative and reflective. Some passages appear to have been written in a meditative consciousness and might serve as the objects of spiritual contemplation.”
—Nehemia Polen, associate assistant professor of Jewish Thought, Boston Hebrew College ,and author of Esh Kodesh, the Warsaw Ghetto writings of Rabbi Kalonymos Shapiro.

The Lamp of God: A Jewish Book of Light
A meditation on 3,000 years of Jewish sources to which the light metaphor is key.

Newly available internationally and affordably in a Kindle edition.

Gut Renovation
Gut Renovation is a memoir-in-progress about the transformation of an apartment that originally was a Jerusalem water well.

INTERVIEWS
“Emmanuel Levinas Face to Face.” Forward, (August 1991). “From Mao to Moses: An Interview with Benny Levy, Leading Maoist and Sartre’s Secretary.” Partisan Review (Fall 1994). “West Bank Women: A Double Defiance,” in Jewish Press Features, reprinted in Genesis 11, 1979, and other newspapers. “A Talk with Aharon Appelfeld.” New York Times Book Review, November 23. 1980 “A Talk with Nathan Rappaport, Sculptor of the Warsaw Memorial.” Hadassah, December 1981.
Last Chance for Closure
Film director Atom Egoyan on his new film 'Remember'—a take on memory and revenge, and a very different kind of road movie.
PUBLICATIONS
http://thejewishweek.com/special-sections/jewish-journeys/dream-trail-unchosen
For Jews of Vichy's "Free Zone" in the early 1940s, the idyllic scenery of the remote village of Aulus-les-bains, nestled amid the intense greens of the Garbet valley at an altitude of about 2,500 feet, on the Pyrenean mountains of the Franco-Spanish border, presented nothing but a deathtrap.
Loading…}